Electional Astrology is very helpful for the timing of events. A chart is created for the birth of a business, marriage, nation and so on.  Did you know that the most influential founders of the United States of America were the Free Masons, who understood the basics of astrology?  Because the Masons were successful businessmen they wanted America’s Electional birth chart July 4, 1776, to have the Sun, Jupiter, and Venus in the second house of wealth. This was a striking serendipitous placement of the money planets, in the money house (the second)  promising great prosperity for our nation.  As a result, the USA has been the world’s wealthiest and most influential people just as our founding fathers intended. 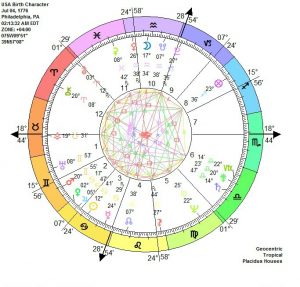 Instead of asking, “What will happen to me?” A more empowered question would be, “What can I do to empower my future?”

You did a reading for me at Esther’s (Melanie) house in Arvada CO in 1997. I had, that day, received news I had failed my Acupuncture Point Location test, for the second time. You told me that day that the decision would be reversed. I had written a letter to the National Acupuncture Board as soon as I got the results in the mail. You told me to go ahead and send it because there would be an unprecedented reversal of their decision. Although I was heartened by your statement, I felt it would never happen. In the winter of 1998, I received a phone call from the Board to tell me that I had been informed I have failed the Point location test, but I had in fact passed. I called my friend, and colleague, with the news. He too was amazed. The news spread through our school like wildfire. He was working in the student clinic when I called and he screamed so loud, everyone thought there was an emergency. The news spread through the school like wildfire! As it turns out 3 other students had had the same thing happen to them. We 3 had all had a model who was inadequate for the purpose and we complained. A decision had never been reversed prior to that nor since, to my knowledge. I always think of how right on you were with that prediction! I am in back in NJ now, but tell everybody about you. Thank you and Blessings to you in the sharing of your special gift! Love and Fun, Lill Pettinato